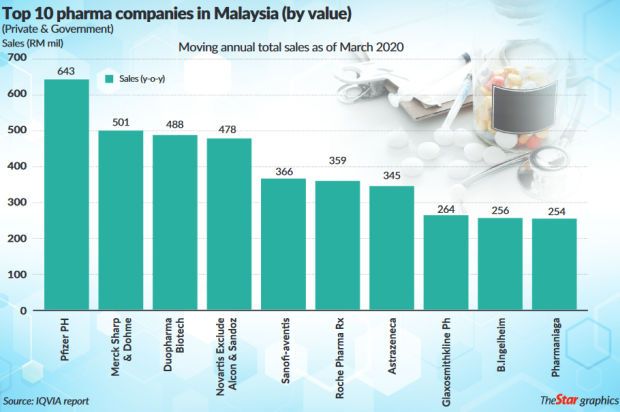 Pharma companies top 10PETALING JAYA: Despite the challenging environment, these are opportune times for the pharmaceutical industry.While the industry like others, bears the brunt of the pandemic, there is also the possibility of a Covid-19 vaccine which is expected to be available in the first or second quarter of next year.Among the frontrunners for the fill-and-finish work of the vaccine, Pharmaniaga Bhd and Duopharma Biotech Bhd, are set to compete and deepen their presence in the competitive pharmaceutical space where multinational companies like Pfizer, Merck Sharp & Dohme, Novartis and Sanofi hold the lion share.

Pharmaniaga and Duopharma are government-linked companies. The former is owned by Boustead Holdings Bhd and Lembaga Tabung Angkatan Tentera, and the latter by Permodalan Nasional Bhd.Pharmaniaga is one of the major contenders in the bottling of the vaccine in the industry. This will boost its prospects amid stiff competition.Commenting on this, deputy managing director Mohamed Iqbal Abdul Rahman (pic below) said: “The packaging and distributing the Covid-19 vaccine will help the company jumpstart the vaccine business. This will also help Pharmaniaga in long-term partnerships, including technology transfer to grow the sector in Malaysia.“By having the facility in Malaysia, it provides us with the security of supply, pandemic/outbreak preparedness and it also places the country in the global vaccine landscape.”It would also be an opportunity to upskill local talents by providing high-skilled employment opportunities, he told StarBiz.Recall that Pharmaniaga had, since 2018, announced plans to have a halal vaccine facility, and is on track to set up the world’s first halal vaccine facility targeted for completion by 2022.The bottling of the Covid-19 vaccine would be carried out at its sterile liquid injection plant in Puchong, which is also a good manufacturing practice (GMP) approved facility.The plant has a capacity of about 10 million doses per month on 10 doses vial.Pharmaniaga, with a market share of about 22%, is the largest pharmaceutical company in the country. Apart from manufacturing, it is also into distributorship and logistics.Mohamed Iqbal said as only few manufacturers have a ready GMP certified liquid filling plant, Pharmaniaga would have an upper hand.Despite that, he said its robust infrastructure for logistics and distributions would also enable the company to leverage on its strength and not to directly compete, but more so for what he described as a “cooperative” competition.A market observer said the bottling of the vaccine would enhance a company’s brand image but in terms of business perspective it is another issue.“The government has identified the potential pharmaceutical companies to carry out the fill and finish process for the Covid-19 vaccine. However, no company has been awarded yet.“Thus, it is difficult to forecast if this fill and finish work will boost the frontrunners for the vaccine businesses as we need to also understand the requirements and terms set by the government, ” he noted.Meanwhile, Leonard Ariff Abdul Shatar, Duopharma Biotech Group managing director (pic below), said he was not sure of the mechanism in purchasing the vaccines.However, there are two possibilities, he said. The first could be the purchase being made by the government and Duopharma conduct the fill and finish process.The company could also, in another scenario, buy the vaccine and on behalf of the government and undertake the fill and finish job, he noted.The vaccine would be bottled at Duopharma’s plant in Klang, where it has a capacity of close to six to seven million vials per year and able to run an a 24-hour basis. The Klang plant is GMP approved.Leonard Ariff noted that the fill-and-finish work for the vaccine would be for the domestic market.Mohamed Iqbal added that while the priority for the Covid-19 vaccine would be for the local market, it was exploring options to export to the international market. This would depend on any agreements with vaccine providers, he noted.Pharmaniaga has presence in 20 countries, including Indonesia and Vietnam, where it has offices. Elsewhere, it has distributors to market its products.Pharmaniaga posted a 3.7% increase in net profit to RM9.61mil for the second quarter ended June 30, compared with a year ago.Net profit for the first half of the financial year rose 10.8% to RM32.02mil, as compared with the same period last year.Duopharma Biotech announced a net profit of RM14.7mil in the second quarter ended June 30,2020, compared with a net profit of RM13.9mil achieved a year earlier.Pharmaniaga’s share price closed 1.42% higher at RM5.70 with a market capitalisation of RM1.49bil.Duopharma Biotech’s closing share price was up 1.82% to RM3.64, bringing its market capitalisation at RM2.57bil.CGS-CIMB, in a recent note, said it was generally positive from Pharmaniaga’s recent analyst briefing.The research house, which downgraded the counter to “reduce” with a higher target price of RM4.28, said it had gathered that the company is looking at vaccine development and manufacturing as a potential longer-term growth driver.“In the near term, Pharmaniaga will look to partner with global vaccine manufacturers to register and sell already produced vaccines in Malaysia, which could contribute as early as FY21 (forecast).“In the medium- to longer-term, it has plans to set up a prefilled syringe facility mainly catering to vaccines (ready by FY22F) and eventually a full-fledged vaccine manufacturing facility, which it expects to be ready by FY26F, depending on the progress of its research and development efforts.“Key derating catalysts include lower-than-expected market share gains and weaker-than-expected margins.“Upside risks include better-than-expected contribution from its fill-and-finish works for the Covid-19 vaccine and better than expected concession business margins, ” it noted.RHB Research said although Duopharma is fundamentally strong, its share price has run up “purely on speculation”.It expected no positive surprises for the second quarter of this year and for the overall 2020 earnings by the company.Fitch Solutions, in its Malaysia pharmaceuticals and healthcare report for the third quarter of 2020, noted that Malaysia’s pharmaceutical market outlook is positive.“The government has adopted a policy which prioritises the welfare of the people, including raising healthcare expenditure and improving medical access. These themes will work to boost pharmaceutical demand, particularly when coupled with the country’s growing population and increasing disease burden.“However, the government has acknowledged the rise of medicine prices impacting healthcare affordability and will seek to impose price control mechanisms in the near future, ” Fitch said.https://www.thestar.com.my/business/business-news/2020/09/01/starbiz-special---vaccine-visibility
DPHARMAPHARMA
Next article Next Post
Previous article Previous Post
‹ Newer Post Older Post › Home