Cover Story: Where are Malaysian players in the semiconductor value chain?

TO understand the role Malaysian semiconductor and electrical and electronics (E&E) firms play in the semiconductor value chain, one has to understand the manufacturing process (see chart).It all begins with the design of the integrated circuit (IC) — a set of electronic circuits consisting of miniaturised electronic components built into electrical networks. The ICs, also known as chips, are created on a flat piece of wafer made of pure semiconductor material, normally silicon. This process is called wafer fabrication.Subsequently, the chips go through a packaging process and are moulded into the appropriate design and form. Wafers are cut into individual chips and the functional ones are welded onto a printed circuit board.To determine whether these packaged semiconductor devices work properly, they are put through testing procedures, including vision inspection, an electrical functional test and a burn-in test.This is where semiconductor automated test equipment (ATE) comes into the picture. ATE systems are designed to not only reduce the amount of test time needed to verify that a particular semiconductor device works, but also to prevent defective ones from reaching the end-user. 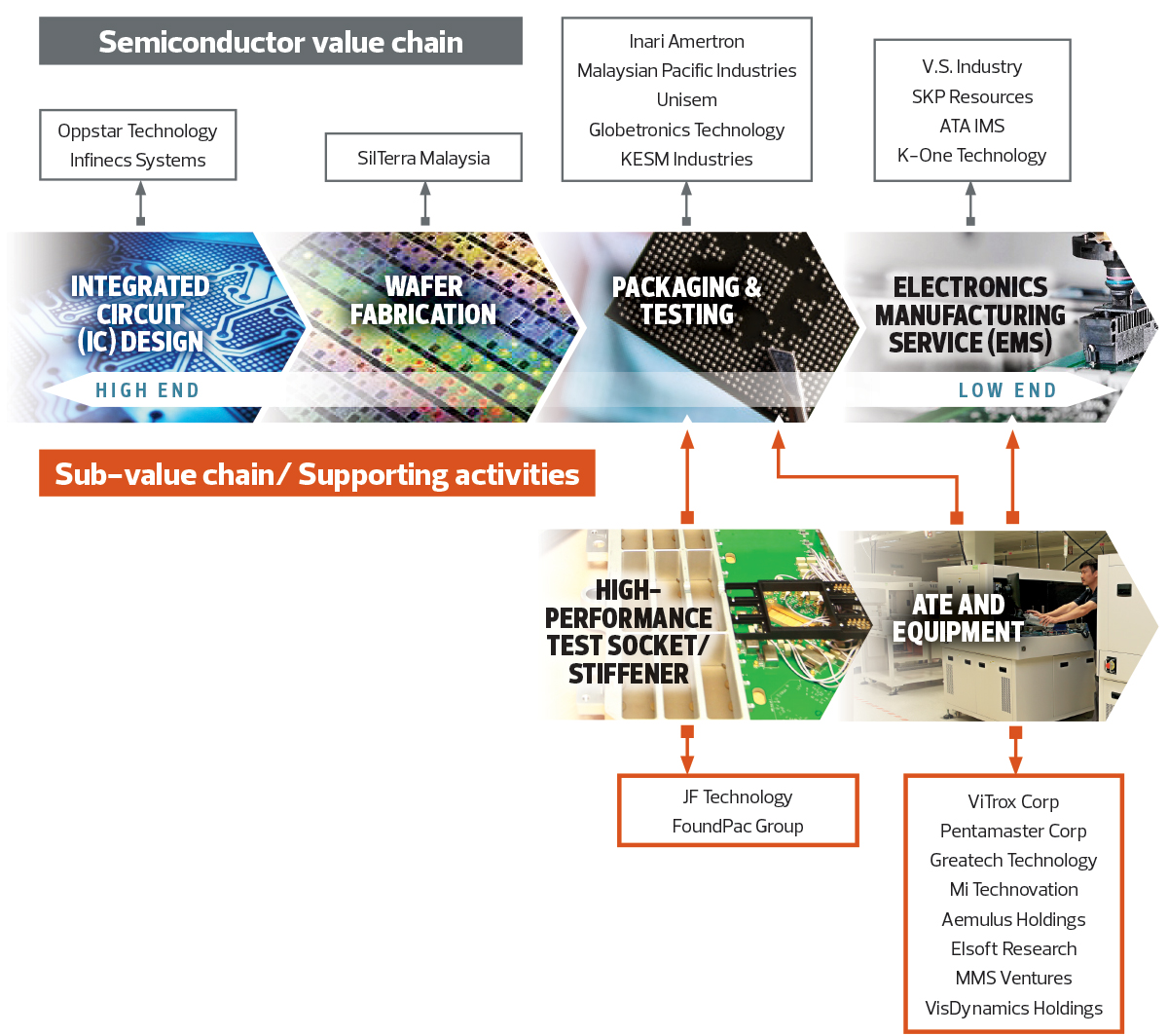 To be more precise, Greatech and Pentamaster are factory automation solution specialists whose clients include MNCs from the semiconductor sector.The third group comprises the likes of JF Technology Bhd and FoundPac Group Bhd, which design and manufacture high-performance test sockets as well as other materials such as stiffeners for Osat companies and semiconductor firms.And then, there are the likes of V.S. Industry Bhd, SKP Resources Bhd, ATA IMS Bhd and K-One Technology Bhd, whose businesses are similar to that of Taiwanese contract manufacturing giant Hon Hai Precision Industry Co Ltd, better known as Foxconn Technology Group. These companies are generally categorised as EMS providers and located lower down the value chain and, hence, not considered semiconductor companies.Fewer players at the front endInterestingly, at the front end of the semiconductor manufacturing process, non-listed Oppstar Technology Sdn Bhd is one of the few home-grown semiconductor contract design houses that focus on IC design.Employing its state-of-the-art process technologies in the dimension of nanometres, Oppstar designs chips that are used in computers, mobile phones, artificial intelligence, the Internet of Things and the automotive industry.SilTerra Malaysia Sdn Bhd — owned by sovereign wealth fund Khazanah Nasional Bhd — is one of the few semiconductor wafer pure-play foundries in the country. It specialises in the production of semiconductor wafers that can be as little as 90 nanometres. The smaller the number of nanometres – a unit of measurement that is one-billionth of a metre – the better it is. Huawei’s latest smartphone is using a 5-nanometre chip.SilTerra was initiated by former prime minister Tun Dr Mahathir Mohamad in 1995 as a national development project and it was supposed to be strategic for the fortunes of the country’s E&E sector.However, industry observers have pointed out that over the years, SilTerra has not been competent enough to fight with the big boys on the global arena.Today, the world’s top three biggest chip giants — Intel, Samsung and Taiwan Semiconductor Manufacturing Co Ltd (TSMC) — are in the midst of developing 3-nanometre technology.In addition, China’s top contract chipmaker Semiconductor Manufacturing International Corp is also attempting to close the technology gap.The nanometre size refers to the line width between transistors on a chip. The smaller the number, the more cutting-edge the chips are, and thus more challenging and expensive to develop.Intel co-founder Gordon Moore predicted in the 1960s that the number of transistors on a chip would double every year — Moore’s Law — but that pace of progress has slowed significantly over time, as it has become increasingly challenging to squeeze more transistors onto a chip.A business that operates a semiconductor fabrication plant is known as a foundry. If a foundry does not produce its own designs, it is known as a pure-play semiconductor foundry. The notable players are TSMC, GlobalFoundries, and United Microelectronics Corp.If a foundry produces its own designs, it is known as an integrated device manufacturer (IDM). Notable examples are Intel, Samsung and Texas Instruments.If a company designs semiconductor chips while outsourcing its fabrication to foundries, it is known as a fabless company. Notable players are Qualcomm Technologies, Nvidia and AMD.http://www.theedgemarkets.com/article/cover-story-where-are-malaysian-players-semiconductor-value-chain
AEMULUSATAIMSELSOFTFPGROUPGREATECGTRONICINARIJFTECHK1KESMMIMMSVMPIPENTASKPRESUNISEMVISVITROXVS
Next article Next Post
Previous article Previous Post
‹ Newer Post Older Post › Home